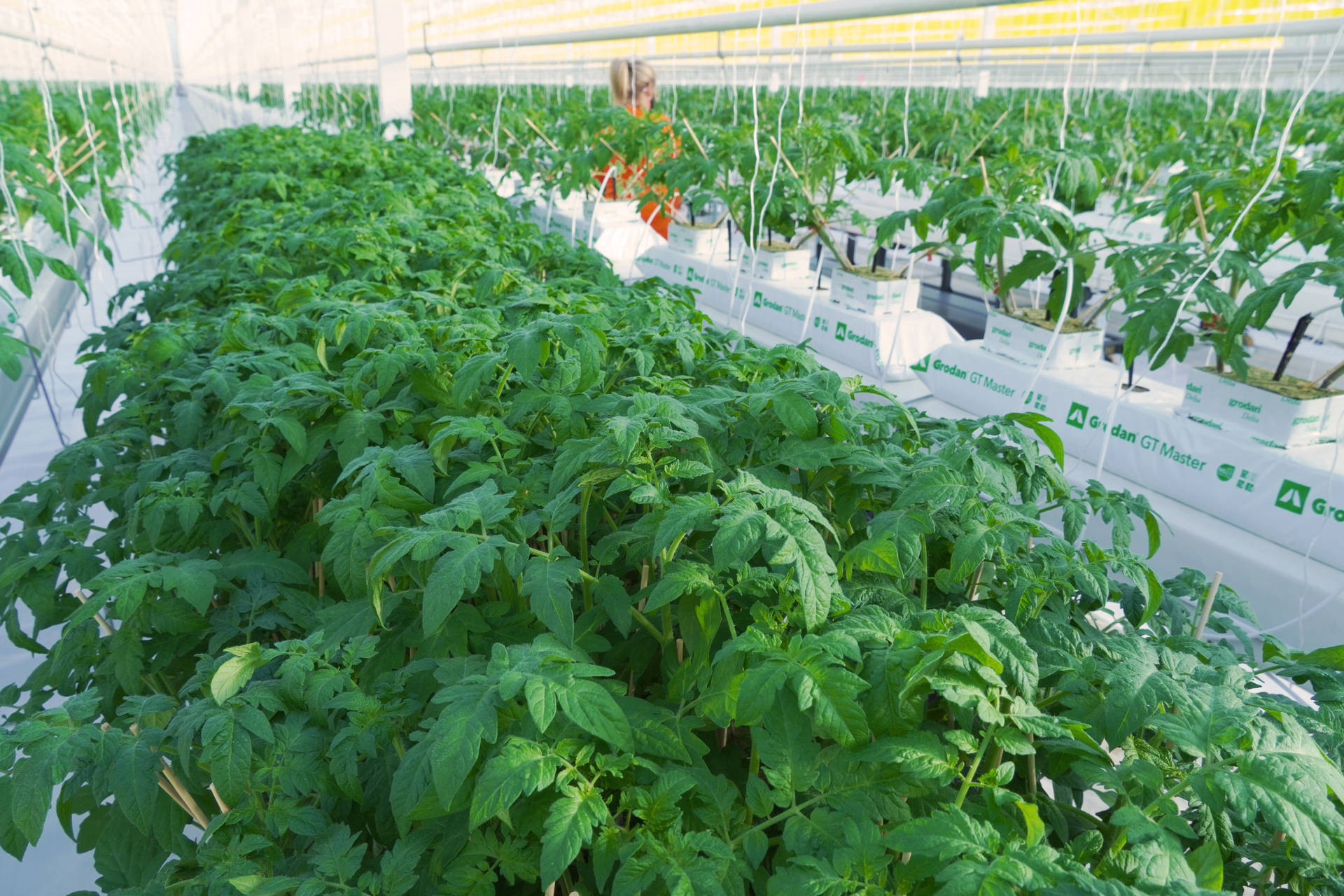 The crop is scheduled to be harvested and available at leading U.S. grocery stores in early 2021.

The Morehead facility spans 2.76 million square feet, the equivalent of 45 football fields. It’s the first of a series of indoor farms designed to redefine American agriculture by growing non-GMO, chemical pesticide-free fruits and vegetables using 100% recycled rainwater at locations closer to the people

“Today is an important milestone for AppHarvest as we seek to build a more resilient American food system from within Appalachia,” said AppHarvest

Founder & CEO Jonathan Webb. “Our team has built one of the world’s largest and most technologically advanced indoor farms, which means AppHarvest’s tomatoes soon will be on store shelves and in American homes. This is just the first step for us. To transform agriculture in America, we need to do this on a large scale, and we’re already taking steps to do just that with construction underway on two more facilities totaling about 75 acres of growing space.”

AppHarvest’s tomatoes are scheduled to be in grocery stores in the first quarter of 2021, and the company reaffirms its expectations to begin recognizing revenues at that time. AppHarvest chose tomatoes as its first crop because more than 60% of America’s fresh tomatoes were imported in 2019, an increase of almost 50% over the past decade. By growing closer to where people eat, AppHarvest’s tomatoes will be picked at peak ripeness and delivered quickly to grocers. AppHarvest is providing Americans with tomatoes that are locally grown using only recycled rainwater and no chemical pesticides. AppHarvest’s worker-first philosophy also promotes fair labor practices.

In addition to the Morehead, Ky., facility, AppHarvest is already building two additional high-tech controlled environment agriculture indoor farms. The first will be comparable in size to the company’s flagship operation in Morehead, Ky., and is located outside Richmond, Ky. The third, located in Berea, Ky., will be 15 acres and grow leafy greens. Why leafy greens? American production is concentrated in Arizona and California, which combine to produce 90% of U.S.-grown leafy greens. These states are in the midst of a decades-long drought and are consuming precious water resources. By contrast, Central Appalachia, where AppHarvest is investing in building controlled environment agriculture facilities, has an abundance of rain, so much so that the facilities can be operated on 100% recycled rainwater.

How else is AppHarvest different from traditional agriculture companies?

In just over two years, AppHarvest has attracted more than $150 million in investment into Central Appalachia and announced on September 29, 2020, its entry into a definitive agreement for a business combination with publicly-traded special purpose acquisition company Novus Capital Corporation (Nasdaq: NOVS). The combination, which is expected to close late in the fourth quarter of 2020 or early in the first quarter of 2021, is expected to provide $475 million of gross proceeds to the company, including $375 million from a fully committed common stock PIPE at $10.00 per share anchored by existing and new investors – including Fidelity Management & Research Company LLC, Inclusive Capital, and Novus Capital Corporation. Upon closing of the transaction, the combined company will be named AppHarvest and is expected to remain listed on Nasdaq under the ticker symbol APPH.

Certain statements included in this press release that are not historical facts are forward-looking statements for purposes of the safe harbor provisions under the United States Private Securities Litigation Reform Act of 1995. Forward-looking statements generally are accompanied by words such as “believe,” “may,” “will,” “estimate,” “continue,” “anticipate,” “intend,” “expect,” “should,” “would,” “plan,” “predict,” “potential,” “seem,” “seek,” “future,” “outlook,” and similar expressions that predict or indicate future events or trends or that are not statements of historical matters. All statements, other than statements of present or historical fact included in this press release, regarding Novus Capital’s proposed acquisition of AppHarvest, Novus Capital’s ability to consummate the transaction, the benefits of the transaction and the combined company’s future financial performance, as well as the combined company’s growth plans and strategy, future operations, timing of first crop harvest, estimated financial position, estimated revenues and losses, timing of expected revenues, projected costs, prospects, plans and objectives of management are forward-looking statements. These statements are based on various assumptions, whether or not identified in this press release, and on the current expectations of AppHarvest’s management and are not predictions of actual performance.

These forward-looking statements are provided for illustrative purposes only and are not intended to serve as, and must not be relied on as, a guarantee, an assurance, a prediction, or a definitive statement of fact or probability. Actual events and circumstances are difficult or impossible to predict and will differ from assumptions. Many actual events and circumstances are beyond the control of AppHarvest.

AppHarvest’s stockholders in connection with the proposed transaction. After the Registration Statement has been declared effective, Novus Capital will mail a definitive proxy statement, when available, to its stockholders. Investors and security holders and other interested parties are urged toread the proxy statement/prospectus, any amendments thereto and any other documents filed with the SEC carefully and in their entirety when they become available because they will contain important information about Novus Capital, AppHarvest and the proposed transaction. Investors and security holders may obtain free copies of the preliminary proxy statement/prospectus and definitive proxy statement/prospectus (when available) and other documents filed with the SEC by Novus Capital through the website maintained by the SEC at http://www.sec.gov, or by directing a request to: Novus Capital Corporation, 8556 Oakmont Lane, Indianapolis, IN 46260. The information contained on, or that may be accessed through, the websites referenced in this press release is not incorporated by reference into, and is not a part of, this press release.

Participants in the Solicitation